Cottage Grove was founded around 1865 and stands today as a chaming & growing community with a population of approximately 8,000. The Vintage homes within its confines are as diverse & colorful as the people who occupy them. From Bungalow styles to ornate Victorians to sedate Craftsman styles, a visit through Cottage Grove’s Vintage neighborhoods is a treat for all. Watch for the following styles & let us know if you have any architectural styles that you believe belongs on this list. Among the most popular styles in the US from the 1920’s through the 1950’s, these houses are characterized by central or end chimneys & gable roofs and are small, symmetrical, 1 1/2 stories with a central entrance. Easy to build, maintain & heat, the design is such that one must walk through one room to reach another. The attic area may be finished into additional bedrooms & a bath. Windows are simple double hung with shutters the same length as the windows. A vine-covered picket fence is traditional. Many Cape Cod houses are scattered throughout Cottage Grove & add charm and spice to the neighborhoods. 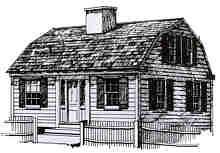 Cape Ann houses are almost identitical to the Cape Cod except for for one distinction, the roof is gambrel. Compact & tidy, as is the case with the Cape Cod homes, each room is accessed through another room, leaving privacy to a minimum. These homes weren’t as popular as the Cape Cod but can be found in variations in Cottage Grove.

Again, variations of this style can be found in Cottage Grove. A romantic “Hansel & Gretel” style cottage, it was popular throughout the US in the 1920’s & 1930’s. Characterized by its ground hugging, asymmetrical style with a prominent brick or stone chimney in the front or on the side that appears very large in relation to the size of the house. Steep gable roof with complex lines (this is the variation we have found in Cottage Grove… homes here have lower profile gable roof lines) and rooms tend to be small & irregularly shaped. The name is derived from “cot” (cottage) & “wold” (wood)- cottage in a wood. 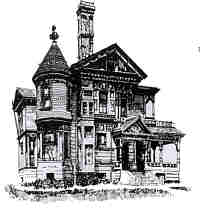 When a Victorian house cannot be classified, the name Queen Anne is usually applied. They are all unique looking, multistory houses, irregular in shape with a variety of surface textures, materials & colors. Many Queen Annes exist in one state or another in Cottage Grove & all are uniquely different from the other. Introduced to America in the 1870’s, they can be distinguished by their various forms of windows, upper stories that project over the lower ones, Bay windows, turrets & big chimneys.

This was a popular turn-of-the-century “low cost” house with plans & parts purchased by mail. It is a long, narrow one-story house with a gable roof that faces the street. It is usually one room wide & several rooms long with a vent on the front gable facing the street, a full front porch & gingerbread column bracket ornamentation. A few exist in Cottage Grove, but the authors were unable to locate any that were in pristine condition. Legend has it, that it comes from the idea that if you shoot into the front door you will hit something in the backyard. 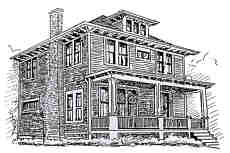 This all American house style was popular during the first half of the twentieth century with parts & plans purchased through the mail. Easy to distinguish, it is a multistory box-shaped house with a hip roof & hipped dormer facing the street with a one-story front veranda, symmetrical shape, little ornamentation & plain porch columns. A “Basic” house, its name comes from the fact that the square shape holds four rooms per floor. (Some variations of the Foursquare can be found in Cottage Grove.)

Quite a few of these homes are found in & around Cottage Grove. Most were built around 1910 & appealed mainly to the middle class. The fireplace or the hearth was the family center & paid considerable attention, with a “man’s” library & a functional “woman’s” workspace. Characterized by overhanging eaves, front porches with square wood or brick columns, 1-1 1/2 stories with a long sloping roof line. Gustav Stickley through his magazine ‘The Craftsman’, designed & published over 220 Craftsman plans. He believed that the “nesting instinct” was the most “deep seated impulse” of humankind & wrote in his magazine:

The word that is best loved in the language of every nation is home, for when a man’s home is born out of his heart and developed through his labor and perfected through his sense of beauty, it is the very cornerstone of his life.

Craftsman style homes were built between 1905-1929 & are considered the forerunner to the Ranch style home.